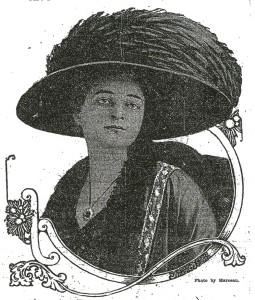 10ish-1905: Ruth Alice Cole was Charles Halliwell’s nurse for an extended period of time following his operation for appendicitis.

10-4-1906: Charles E. Halliwell married  Ruth Alice Cole at all Angeles Church in Manhattan. She had been his nurse (22 years younger). The press referred to her as “The Pretty Nurse.”

5-6-1907: Charles E. Halliwell died of a cerebral hemorrhage and, after only seven months of marriage, Ruth Alice, who previously had been an unknown in New York, was worth 1.25 million dollars.

2-26-1909: Ruth Alice Halliwell married Charles Halliwel’s former business partner and close friend, William Porter at the Plaza Hotel in Manhattan. They lived in luxury at the 20 story Plaza Hotel on Manhattan’s 5th Avenue. They also owned a large track of land in the Ramapo mountains of New Jersey where William had built his country home. It was a large stone and wood beamed structure, what many called a castle, which William had named Foxcroft because it sat atop Fox Mountain.

5-25-1911: Ruth Alice was widowed a second time in 1911. William Porter and three of his stock exchange friends were being driven by chauffeur from Foxcroft towards his office in Manhattan. William was critically injured in a car accident and died a week later.

8-11-1917: Ruth Alice Van Slyke departed New York bound for France aboard the Espange. She will do war work as an auxiliary nurse for the “American Girls Aid” which established a hospital in France the previous month on the western front.

4-1922: Warren Van Slyke acted as counsel for relatives of the Lusitania victims and argued claims against Germany for damages.

4-7-1925: Warren Clark Van Slyke died at Roosevelt hospital in Manhattan following an operation for gallstones. He was 51.