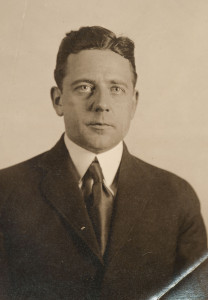 1907: Charles H Duell Jr. attended Yale, but dropped out at the end of his senior year in 1908 to attend New York Law School.

10-14-1912: Theodore Roosevelt was shot in the chestwhile campaigning in Milwaukee. Roosevelt was seriously wounded but, because the bullet passed first through a 50 page speech in his front pocket as well as through his metal eyeglass case, he was not killed. Charles H Duell who was working on Roosevelt’s secretarial staff was present during the attempted assassination.

3-10-1914: Charles H Duell Jr. helped to support District Attorney Charles S. Whitman (whom he had previously worked for) as a candidate for New York Governor, to appear on both the Progressive Party and Republican tickets. Whitman asked Duell to convince Roosevelt to endorse him for Governor. Roosevelt distrusted Whitman, and Duell expended an enormous amount of time and energy trying to broker a peace between the two. Duell also made very strong personal public endorsement of his own for Whitman. Everything blew up in Charles Duell’s face when it was revealed that Whitman was simply pretending to be loyal to the Progressive Party in order to get the Roosevelt endorsement. The scandal was in the press. Duell was right in the middle of it and in the end he did a 180 and publicly condemned Whitman as a liar. Duell continued in politics, although never on the same level.

1917: Charles H Duell served in the US Navy as a lieutenant on the SS Destroyer Wickes operating out of a base in Queenstown, Ireland.

5-3-1919: Commander Charles H Duell Jr. was a delegate at large for the newly formed American Legion, a national organization of Veterans of the World War.

3-1921: Charles H Duell Jr, Richard Barthelmess and successful west coast director Henry King  joined together to form the motion picture company Inspiration Pictures, of which Duell was president. (I would love to find out more about Inspiration Pictures, and specifically how Charles got drawn into the film business) The first movie produced was “The Cave Girl.” Charles fell in love with one of the actresses, former Broadway star Lilian Tucker, and shortly after the two were married. (I have read mention, by author Charles Affron, that prior to meeting Charles Duell, Lilian Tucker knew Lillian Gish. Does anyone know any details of their friendship / relationship?)

After wooing unemployed actress Lillian Gish, Charles succeeded in hiring both her and her sister Dorothy. The first film he stared Lillian in was the blockbuster “The White Sister.”  An affair developed between Charles and Lillian. Charles divorced his first wife and became engaged to Lillian Gish. However Lillian left Charles shortly after completion of their next big movie “Romola.” She refused to work for him. In 1925 he filed a breach of contract suit, but it backfired on him in court and he lost everything.