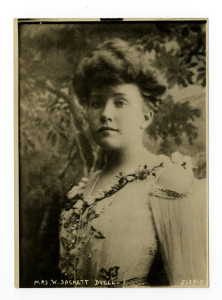 7-21-1887: Born to Mary (Tooker) Best and Colonel Clermont Livingston Best in Newport Rhode Island. Annie was educated at the finest schools in France. She was an accomplished linguist and, sharing her mother’s love for piano, became an accomplished and celebrated pianist. After being announced for special attention at Mrs. William Astor’s mid-season ball, Annie caught the eye of the press who regularly covered her in the news, referring to her as “Baby Best.” Annie had two failed marriages before meeting Sackett during her war work.

6-16-1925: Annie married for the fourth time, this time to a businessman by the name of Charles Albert Smylie. The marriage ended in divorce in 1932.

10-1-1932: On October 1, 1932 Annie Livingston Best finally married the man of her dreams. Vladimir A Behr grew up in Moscow where his father was a wealthy cotton broker.