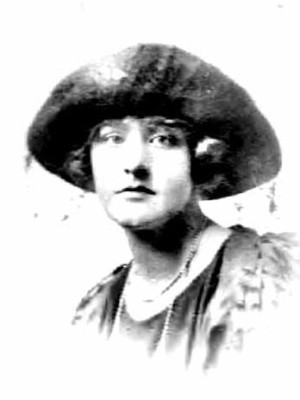 9-21-1894: Lilian Tucker was born to a Norwegian mother and English father the day after her parents arrived there from Europe. Her mother was a talented concert singer, and Lilian inherited her beautiful voice.

1904: Lilian, at the age of 17 joined George M. Cohan’s musical comedy company in Chicago and began her career as an actress and soprano, rising quickly from the chorus to prima donna parts. She built a successful and established stage career including a two year tour in Australia. She later became widely acclaimed for her leading role in Three Faces East which ran for a full season in Chicago in 1920, and also appeared in a little over a half dozen silent films, although none were big box office hits. Lilian was “said to be one of the most beautiful women in America” and “had been described by artists and sculptors in this country and abroad as the typical Greek Goddess.” Upon completion of The Cave Girl Lilian dropped her first name and adopted her character’s name of Elsie, which she not only used informally but also on formal documents such as passports.

1-24-1924: A divorce was granted to Lilian (Tucker) Duell in Paris on grounds of desertion