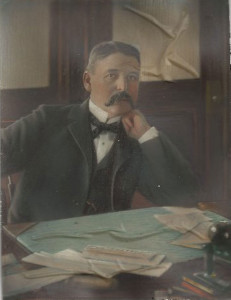 1853: His family immigrated to St. Louis Missouri when he was three years old.

1900: Soon after becoming an officer of American Tobacco Company, to accommodate the busy merger business of the company, Charles E. Halliwell moved his family to Manhattan, becoming one of the wealthiest men in New York.

3-11-1902: Annie (Brown) Halliwell, wife to Charles E Halliwell died from pneumonia after an illness of less than two weeks.

4 to 7-1902: Shortly after the death of his wife, Charles Halliwell moved to the Hotel Majestic, along Central Park, occupying very expensive apartments.

10-4-1906: Charles E. Halliwell married  Ruth Alice Cole at all Angeles Church in Manhattan. She had been his nurse (22 years younger) for two extended periods of time following an operation for appendicitis.