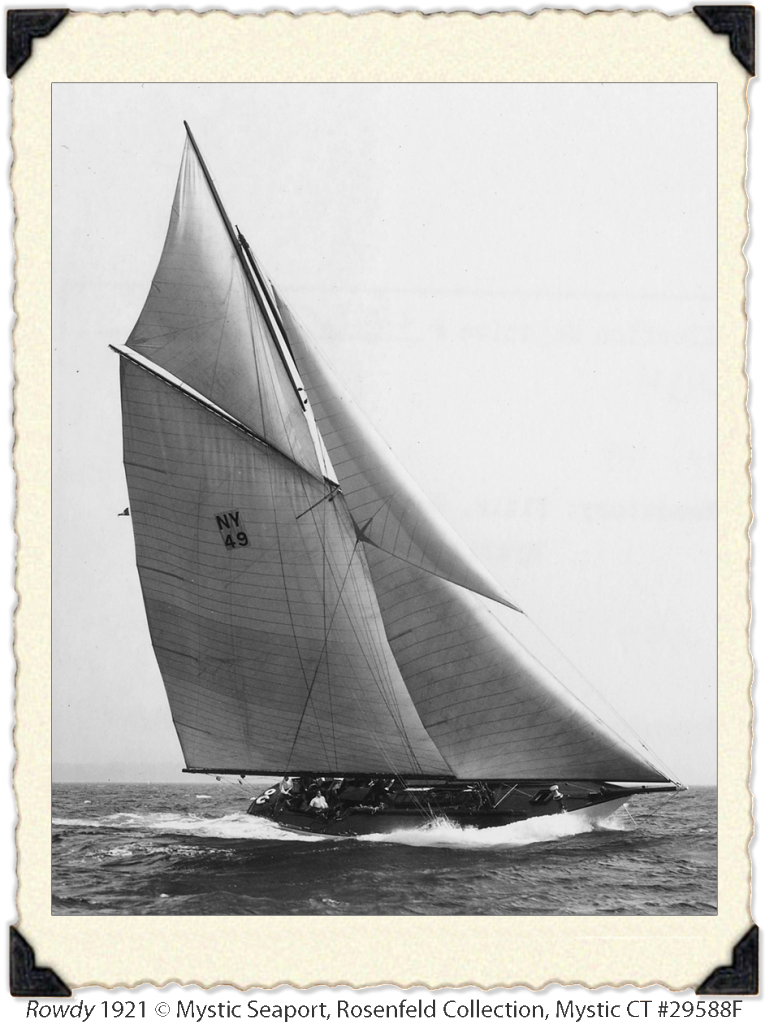 For the next six years I labored 10 – 14 hours a day to restore Rowdy back to her former glory.

It was during that time that it seemed Rowdy beckoned me to probe into her past, and had she not, a truly remarkable story would most certainly have been lost to time. During the days I wore a tool belt, and during the evenings – a detective hat as I scoured the internet and sent off letters of inquiry hoping to learn anything of her original owner. Century old information is hard to unearth, but little by little stones were overturned, and eventually, like reconnecting pieces of a jig saw puzzle, a story started to form and come to life. By the time Rowdy left my stewardship I had become a first time father to twin daughters, and wanted no more projects, but what I had learned of her history  and her original owner so moved me that I felt an overwhelming obligation to preserve the story and share it with others. 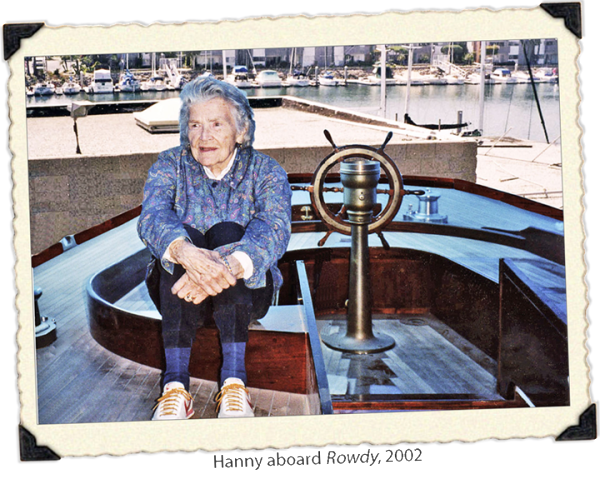 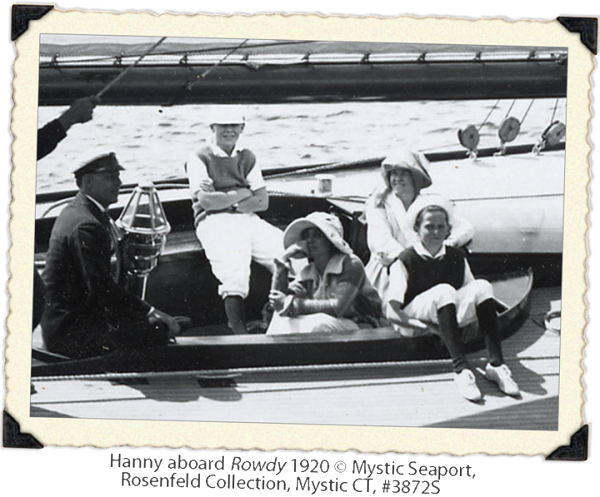 Holland Duell was the Epitome of American Blue Blood.

His forefathers were among the first pilgrims that arrived at Plymouth, and his heritage from that point forward was impeccable. He was a descendant of notable heroes of the American Revolution; his grandfather was instrumental in the formation of the Republican Party and gave powerful speeches to Congress for the abolition of slavery, and in support of the Civil War. Both his father and grandfather served terms as the United States Commissioner of Patents, and held close, intimate friendships with many presidents. But Holland fully made his own mark on the world as a highly decorated World War I hero, powerful Patent attorney, New York Senator, businessman and highly respected sailor.

Life for Holland seemed to be magnified to a grand scale.

His home of Ardenwold was a 20,000 square foot mansion on 20 acres. His military career eventually elevated him to the position of colonel. His law firm grew a reputation as being the premier authority in patent cases in the entire New York area and, in the middle of this carrier, a run at politics elevated him to the position of New York Senator. He was a strong man – a leader of men, yet there were times in his life when he was confronted with and struggled with personal challenges. In time I became so intimately familiar with every aspect of Holland Duell’s life, that I was able to envision and understand what he must have been thinking, and feeling emotionally at the times when life challenged him. 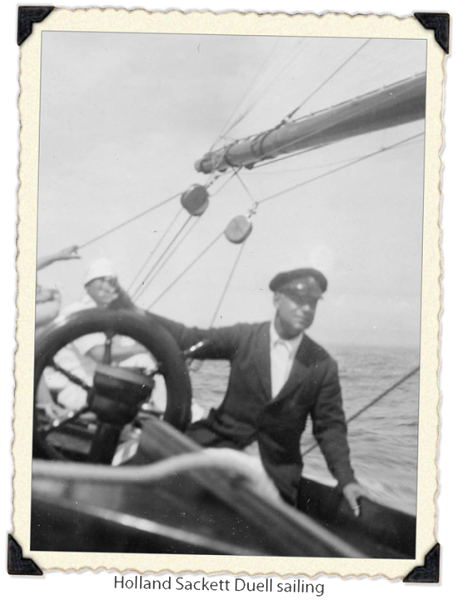 Oh, if she could talk, the stories she would tell… In a sense, she has spoken to me. When I bought Rowdy in 1998 her condition was so far gone with rotten planks, crumbling caulking and failing fasteners that her bilge pump ran near continuously, straining to keep her afloat against a tide of sea water which cascaded in through a continuum of leaks. 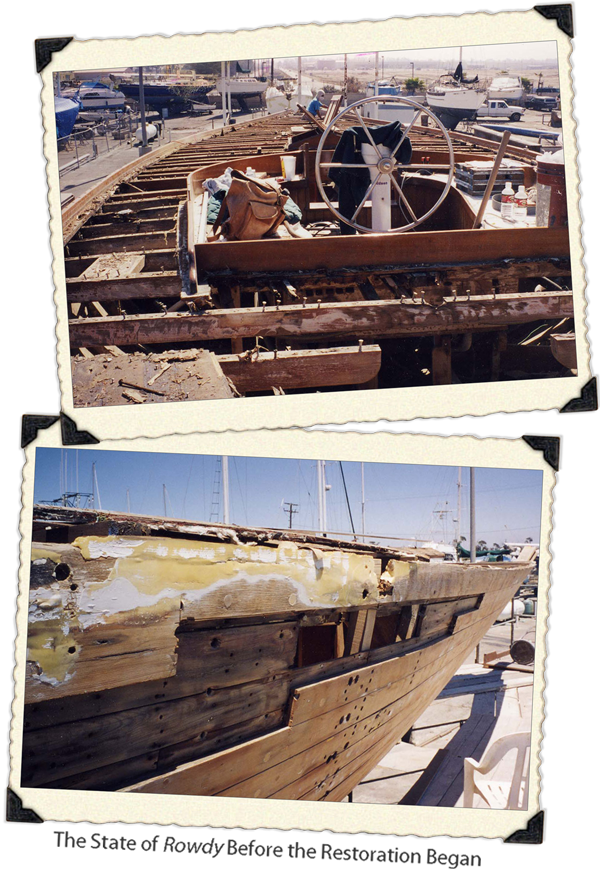 The first bit of information I had found came from the Herreshoff Maritime Museum in Bristol Rhode Island.

In 1916 the Herreshoff Manufacturing Company had delivered twelve identical yachts to members of the New York Yacht Club. The New York Forties (40’ at the waterline, 60’ on deck) were to be raced against each other as a class, and the museum housed the original order book. Rowdy had been ordered by Holland Sackett Duell. With his name, I was eventually able to locate his one surviving daughter and Harriet-Anne (Duell) Pierson “Hanny”, who, at 93 years of age, flew from the East Coast to the West Coast to be aboard Rowdy for the first time in 83 years. Hanny introduced me to Holland’s grandchildren and great grandchildren, and soon the number of leads I had, which branched out to personal interviews, Libraries, museums, historical societies, newspaper archives, old Supreme Court cases, yacht clubs and the like, became almost more than I could keep up with. 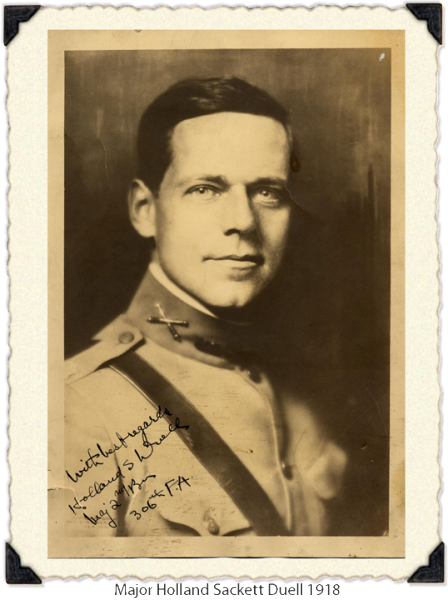 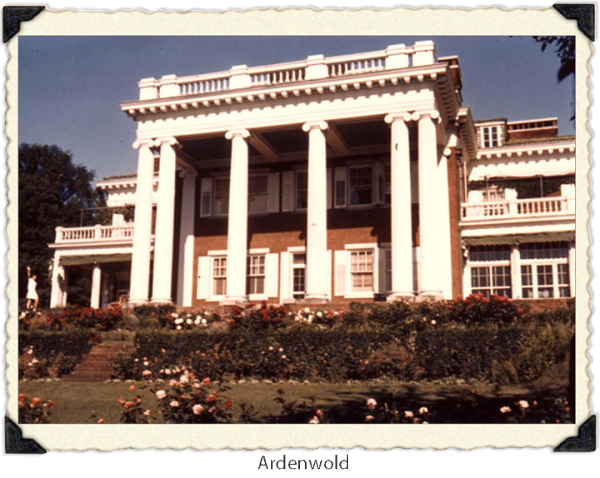 Throughout the good times and the chaos of the bad times Rowdy was Holland’s center of gravity.

Stepping aboard effected an immediate uplifting of the spirit as all of Holland’s high profile problems were happily left behind on the dock. Holland was an avid sailor and participated in recreational sailing and serious racing at every opportunity. He owned Rowdy for almost 25 years and during that time established a reputation as one of the most respected and best liked sailors on Long Island Sound. While Rowdy is the common thread, and almost a portal through time that allowed me access to this story, the true focus of the book is on Holland Duell; a man whose heritage is woven into the very fabric of this country. Aside from being an academic work of historic significance, Rowdy is a personal story told from an intimate perspective, as it follows Holland’s life and death struggles on the battlefields of France to his challenges at home including his quest for true love and his pursuit of freedom from overbearing circumstances that limit his time on the ocean. As of this writing, Rowdy is berthed in Monaco where Graham Walker’s many racing victories have elevated Rowdy’s status to that of world class champion.

In the spirit of a good story that one wants never to end, I welcome anyone who would like to share any further information or old photos to please contact me privately through the Contact page, or publicly through the Blog.